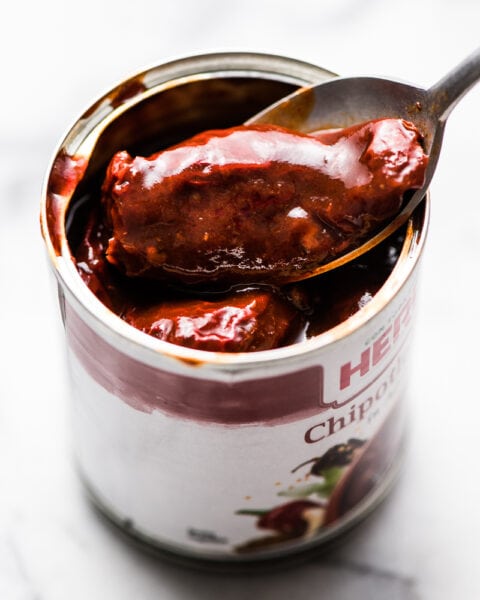 Chipotle peppers add a classic smoky flavor and a kick of heat to any dish. Learn more about this popular Mexican ingredient, what it is, and how to use it!

What is a chipotle pepper?

A chipotle pepper is a jalapeno chili pepper that has been smoked and dried. Chipotles are usually made from red jalapenos which are the ripest, but it’s possible to make them from the less ripe green peppers as well.

Chipotles are popular in Mexican and Tex Mex cuisine as a way to add heat and flavor to dishes. You can find them in any Mexican market or the Mexican food aisle of most grocery stores.

How hot is a chipotle pepper?

Chipotles are about as hot as jalapeno peppers which fall between 2,500 and 8,000 SHU on the Scoville scale.

Climate, soil, and rainfall all affect how hot jalapenos will be, and the level of ripeness determines heat as well.

Since most chipotle peppers are made from overripe jalapenos, they will usually be at the higher end of the heat range. For reference, bell peppers have a SHU of 0, while the ghost peppers are around 1 million SHU. So overall, chipotles have just enough heat to be noticeable without being too spicy.

Removing the seeds and veins will cause them to be milder.

Despite these being fairly mild to eat, the capsaicin they contain can still irritate your skin. As such, it’s best to wear gloves when handling any kind of spicy pepper.

Also, avoid touching your eyes or face until the gloves have been removed and hands have been thoroughly washed.

Dried chipotle peppers can be stored in a cool, dry place for up to a year, but they are best when used within 3-6 months.

Freezing them in an airtight container will extend their shelf life as well.

Making your own chipotle peppers

While they are readily available for purchase, it’s just as easy to make your own chipotle peppers at home. Start with fresh jalapeno peppers that have ripened to a deep red color. They should be firm with no cracks or blemishes.

Next, wash and dry the peppers. The stems can be removed or left on for easier handling.

Then, follow these steps to smoke and dry the peppers:

TIP: If you can’t watch the smoker all day, you can smoke the peppers for about 3 hours and finish them in a dehydrator or low-temperature oven.

Chipotle peppers in adobo sauce are fairly easy to find in the United States in most major grocery stores. Here are some ways to use it:

The post All About Chipotle Peppers appeared first on Isabel Eats.