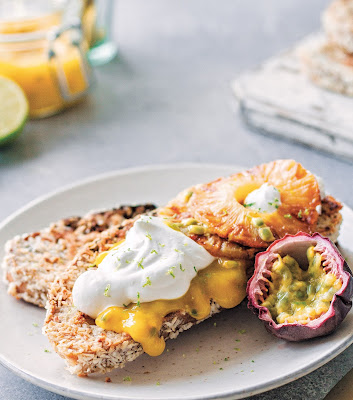 Served with caramelized pineapple, this luscious morning indulgence was

inspired by a breakfast date long ago in Adelaide with one of my biggest influences: artist, author, restaurateur and runner-up of MasterChef Australia’s first season Poh Ling Yeow. On my plate that day was the most amazing coconut-crusted French toast. Goodness only knows why the café we dined in later removed their version from the menu, but I recreated the basic flavors with my own vegan version, and won a competition hosted by television cook Alice Zaslavsky in the process. The recipe itself was never shared publicly in its entirety—until now. Want to know a simple way to increase the natural sweetness in fruit without adding extra sugar? Caramelize it! Not only is this caramelized pineapple delicious in conjunction with this tropical take on French toast, it’s great with oatmeal, on chia puddings and even added to salads!

Recipe Note: Gluten-free sourdough bread, or a sturdier gluten-free bread of choice, may be used.